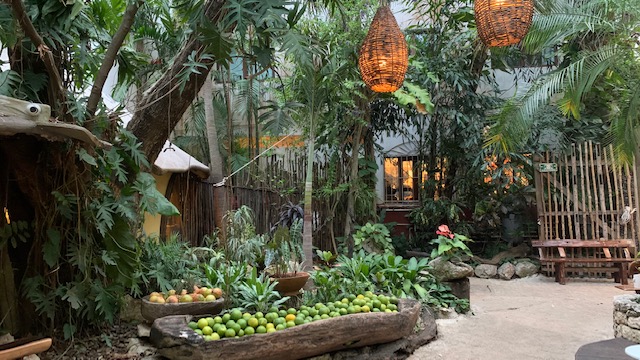 Playa del Carmen in Mexico’s lovely state of Quintana Roo has become a travel favorite for us. Even with the humid heat, mosquitos, and occasional sargassum (thick seaweed in the ocean), it is an attractive and fun place to visit. The pandemic is improving and the bustling city has mostly returned to its usual state, with hundreds of businesses to explore. I had fun discovering various new veggie-friendly restaurants and stores, along with relocations and changes to existing favorites.

Vegans, vegetarians, and flexitarians alike can have a blast taking a tour of the several health-conscious places all within walking distance of each other. Basic Foodie, which makes delicious sandwiches and vegan pastries, moved to a nice indoor/outdoor space on Avenida 25. If you are seeking soy products and dairy-free cheeses, a new store called Diosa Vegana is steps away. 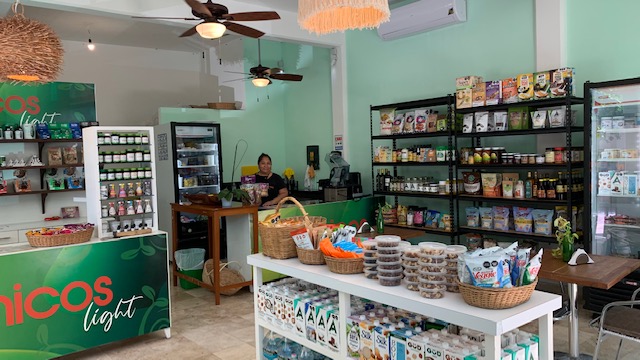 Bio-Organicos, a tasty Playa hangout, added a bright second location with the “Bio-Organicos Light” store on Avenida 25, offering nutritious products and a scaled-down version of their restaurant menu. A few doors away in the cute Mercado 30 building, vegans rejoicing at both Peace and Bowl and Bajo Café can also cool down from the tropical heat with a drink from Diosa Organics Kombucha. An additional highlight on Calle 30 is Naia Gourmet, selling bread, almond butter, chia seeds, cacao nibs, and the like. Farmers Market Playa (on Avenida 30 across from DAC, another good site for healthy groceries) also offers fresh produce and vegan cheeses and burgers. Dessert lovers must not miss Panneria on Calle 34 for an excellent array of vegan, gluten-free, and sugar-free cakes, cookies, and other treats. 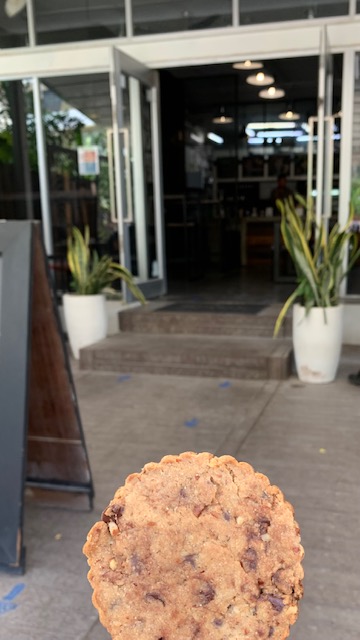 When in the north part of Playa del Carmen, Olio Mercado Vegano on Calle 38 is a worthwhile stop to purchase desserts, protein powder, snacks, and such. Not far from the beach are some great eateries for herbivores, such as La Cueva del Chango on Calle 38, which not only has a vegan portion of the menu but a beautifully dreamy tree-filled ambiance. For high-quality plant-based burgers, omelets, soups, cookies (pictured), and beyond, The Pitted Date on nearby Calle CTM is a must. When on Calle CTM, look for Aryan, a newer Indian restaurant dishing up flavorful foods.

Be sure to use Happycow.net and Google to find veggie favorites, and ask other travelers and locals about additional places. There are many more eateries than what I have listed here! 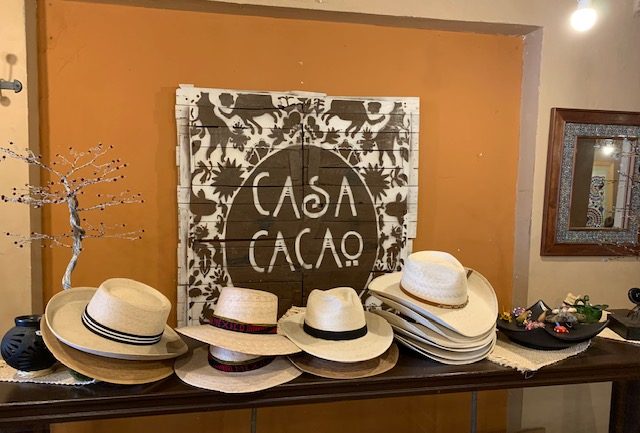 I will travel miles for quality chocolate and vegan food, even through hordes of pedestrians, fruit and vegetable vendors, and a zoo of honking cars. So yesterday my love and I made our way through the center of Tijuana near the famous and bustling Avenida Revolucion because surprisingly that’s where you’ll find a peaceful and charming family business. The minute you walk it feels like a retreat from the craziness outside, as you are welcomed by the friendly Mexican owners and taken by the colorful art and hats all around.

Casa Cacao features the beloved food of Mexico’s Oaxaca region and honors the health benefits of cacao, full of antioxidants and known for lowering blood pressure, improving digestion, lowering the risk of heart disease and stress, and beyond. The menu includes some vegan options such as tamales with mole negro, a hot artisanal chocolate chai drink, and delicious coffees. We loved chatting with the owner Jose Luis, who recently became vegan as part of his efforts to improve his health and lose weight. I can’t wait to go back; it looks like a great place to have a celebration with a group of loved ones. 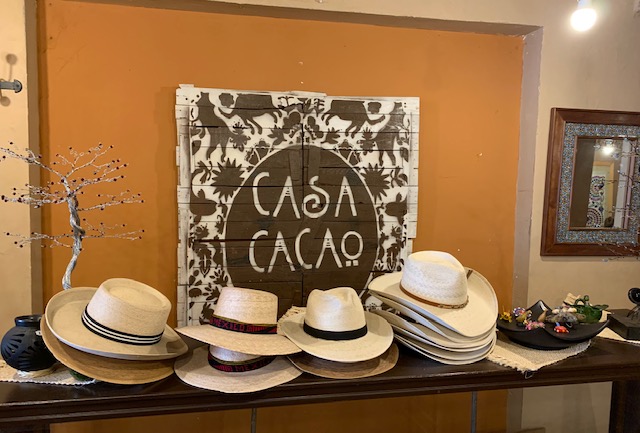 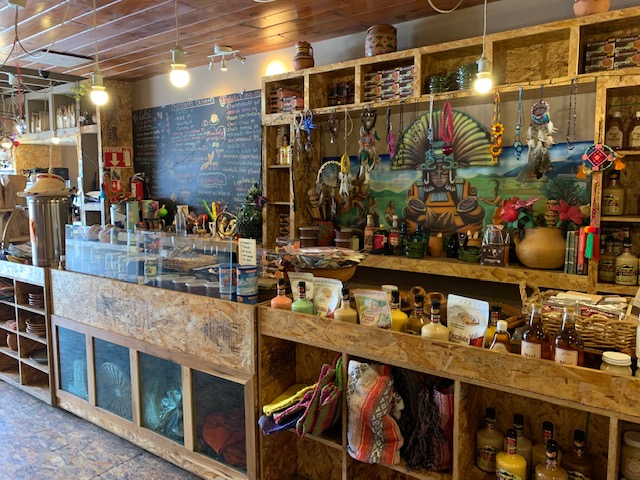 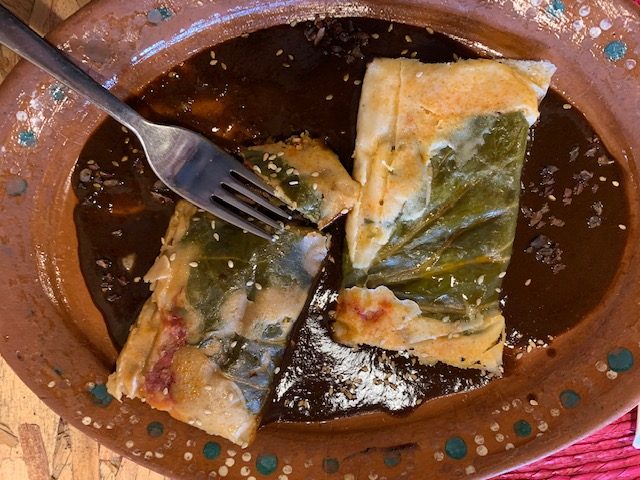 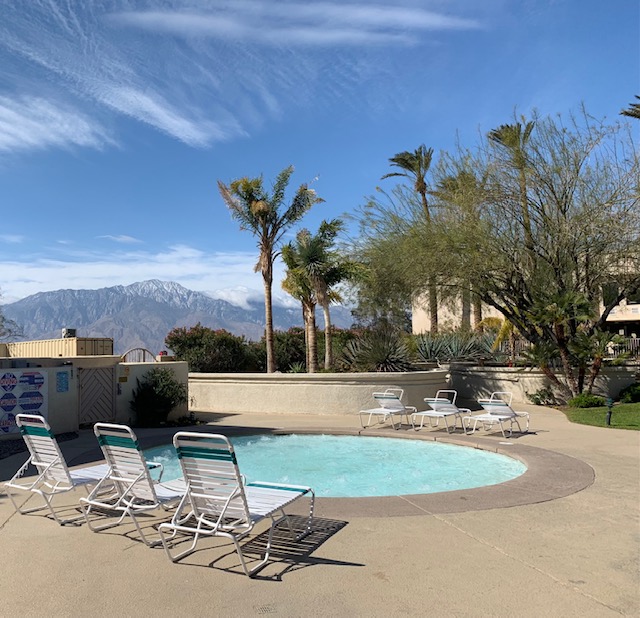 Delights of the Desert

After more than a year of the pandemic, we were ready to explore new sites rather than feeling cooped up at home. Once the sunny spring hit, we chose an overnight journey to the Southern California desert with its expansive mountain views. Our road trip to the Desert Hot Springs area entailed several hours of driving but was worth it for the getaway to some relaxing and beautiful mineral hot springs. We also did a bit of sightseeing in nearby Palm Springs, a special family hub where my dad and grandparents lived for years and I often visited as a child.

To add to the fun, I usually support any veggie businesses possible when visiting a new city. Chef Tanya’s Kitchen makes a tasty meatless Chupacabra Chick’n wrap, which hit the spot. Those who go to the Palm Springs location (pictured) can take their food to go or grab one of a few tables outside, along with enjoying a small vegan grocery store with unique products. 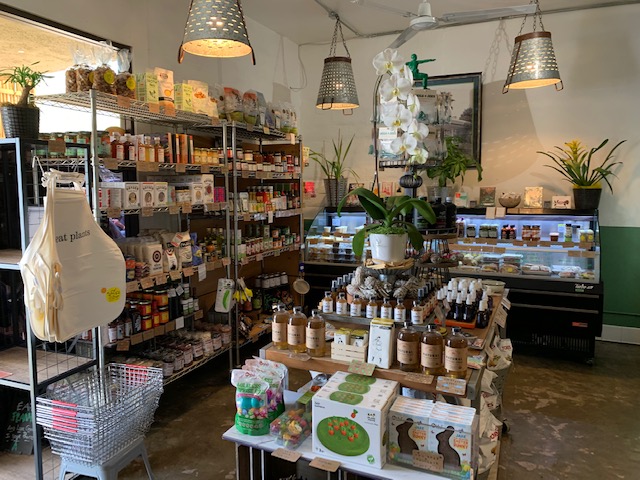 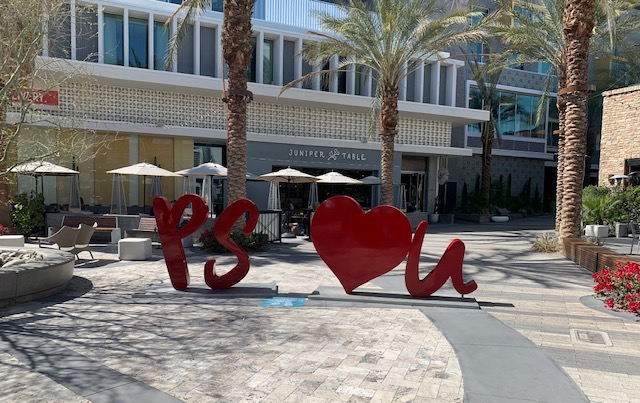 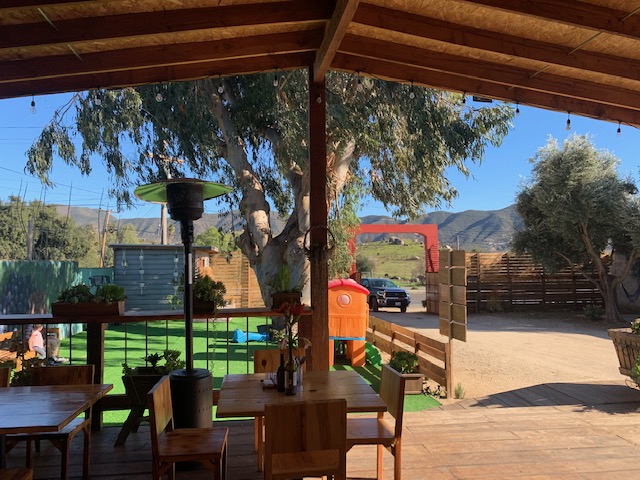 For those exploring the north end of Baja California, Valle de Guadalupe is a must-see wine valley approximately an hour from coastal Ensenada or about a two-hour drive from San Diego. There are over 100 wineries in the region, but you don’t have to drink alcohol to soak up the sun and enjoy the beautiful mountain landscapes. Fellow plant-based friends and I found cauliflower steaks and delicious pizza at the lovely, open-air Coraza Restaurante. Later we watched the sunset and walked around the attractive property at Casa Frida, which has various mostly outdoor restaurants/ bars. Getting a dose of nature, tranquility, and local culture is worth the drive. 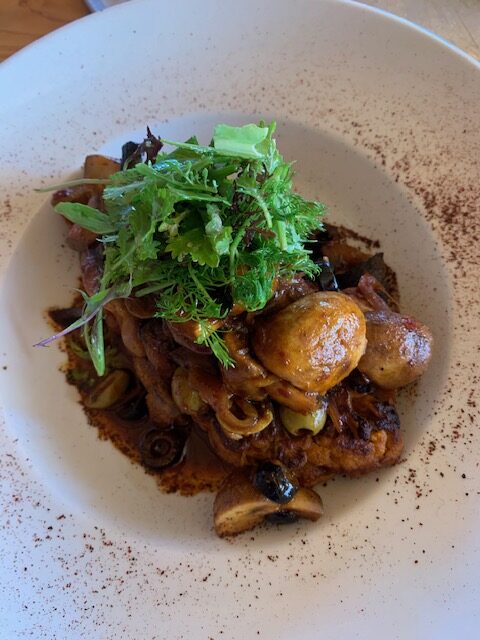 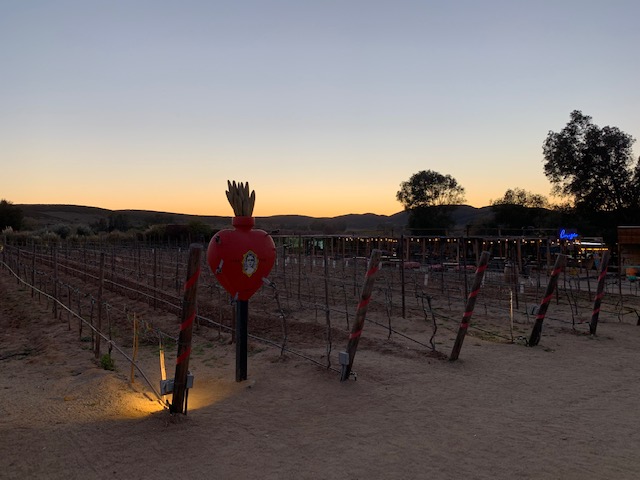 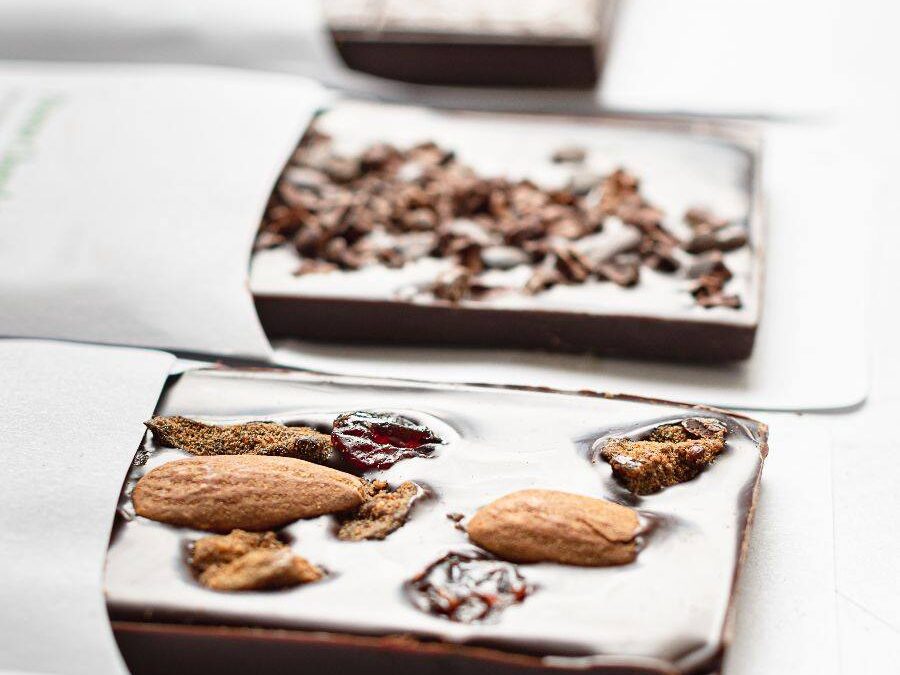 Chocolate for a Cause

Rescue Chocolate is not only organic, vegan, and fair-traded, but the company gives 100% of the net profits to animal rescue groups around the U.S.! Each delicious flavor represents a different rescue issue, and the chocolate bar names are creative, such as Foster-iffic Peppermint, educating people about the need for pet foster homes. Or try Forever Mocha, a bar highlighting that pets require a lifetime commitment.

Within the eco-friendly packaging, you’ll find some crafty snacks. The Mission Feral Fig bar has big, beautifully visible pieces of almonds and dried figs. Based in Brooklyn, New York, Rescue Chocolate can cater baby showers, weddings, or other events. Buy the products online or contact the company regarding mail orders. You can even have the tasty products shipped to Canada and some countries in Europe. Sarah Feoli, the founder of Rescue Chocolate, also actively plans vegetarian events around the U.S. 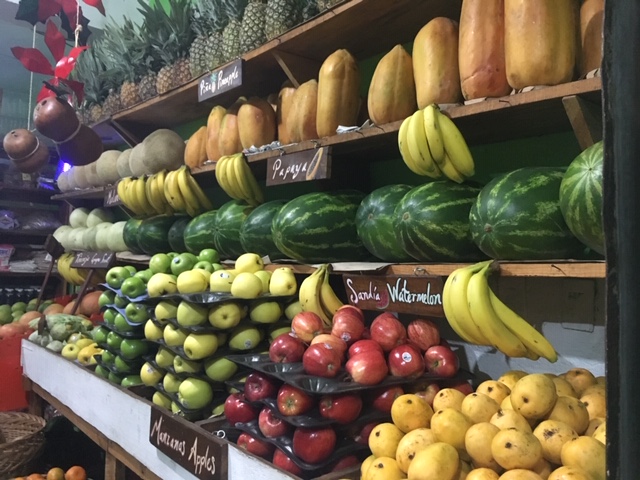 Playa del Carmen, a hot and humid city in Mexico’s Riviera Maya known for gorgeous beaches and its buzzing La Quinta Avenida (Fifth Avenue), is like a vegan utopia. One could go out to eat regularly and find meals, snacks, and drinks to enjoy, whether in fully-veggie eateries or at mainstream restaurants and cafes designating vegan meals on their menus. Many tasty spots are within walking distance of the center of town.

Note: as of January 2021, there have been various changes to the veggie-friendly eateries in Playa del Carmen. It’s best to check with the businesses directly, but here are a few updates. Clorofila Green & Vegan has shut down. La Senda Vegana and Madre Milpa, its successor, have closed. Visitors can enjoy Panneria at its new location on Calle 34, and the establishment has started serving pizza along with a range of delicious vegan keto treats. Ta’consciente is only selling packaged products to go for the moment.

These photos represent a sampling of all the great spots in the area! Also check out Bio-Organicos, The Pitted Date, Fresco Habito, Jonny Como Pizza, Basic Foodie, Bajo Cafe, Ah Cacao (for Mayan chocolate treats), Sushi Playa, and Fritxs (delivery only), along with many other places listed on HappyCow. 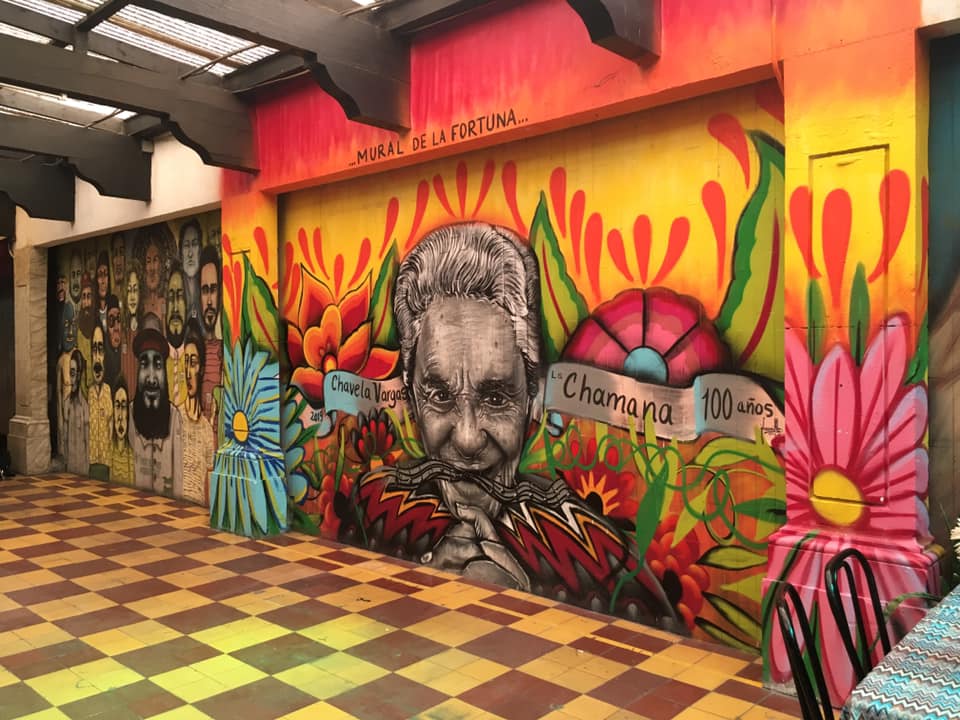 Mexico is highly enticing. Not only are the people warm and the landscapes beautiful and diverse, but the tasty food is famous worldwide. The colorful, vibrant streets and plazas are just some of the charms the country offers. 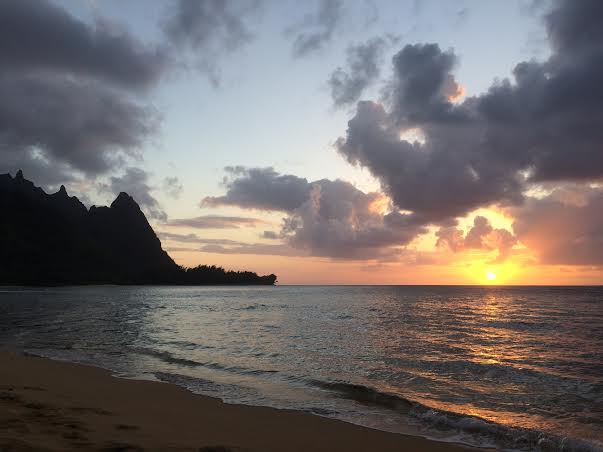 There aren’t words to describe the outstanding scenery in Kauai, Hawaii!

Even after having been there numerous times because my Los-Angeles based family made the island home many years ago, it is always incredible to see a rainbow and the lush green mountains pouring down into the sea filled with colorful fish. It just brings calm to your soul and is so much more than what it seems in the movies.

One of my favorite places to eat on the island will always be my parents’ Postcards Restaurant (formerly Postcards Cafe) in Hanalei on the island’s North Shore, not far from Princeville. They serve international dishes, many with fish, and the place is very veggie-friendly; just ask the server for options. 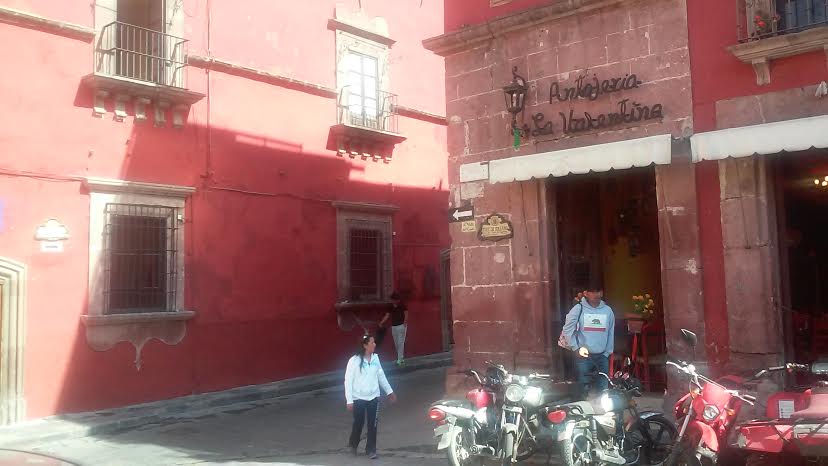 Reprinting a favorite from a lovely trip.

Venturing through Mexico is doable, though it takes some research and resourcefulness, especially as a vegan. Efforts are needed to avoid lard, chicken stock, and other animal ingredients while also dodging stomach issues that may arise from local unbottled water or produce that has not been cooked or disinfected. Speaking Spanish helps with asking waitstaff questions, though there are no guarantees.

In enormous Mexico City, I was mainly fueled by beans, avocados, and steamed vegetables. Charming Coyoacan, the area in which Frida Kahlo and Diego Rivera lived, offered a tasty grilled vegetable meal at Anselma Parilla Mexicana, with a broad view of the surrounding plaza and fountain. We soaked up other sights too, walking down Avenida Madero in the historic center and climbing the incredible ancient Pyramid of the Sun at Teotihuacán, said to be the third-largest pyramid in the world.

The colonial towns San Miguel de Allende and Guanajuato were captivating and had some decent vegan options. From Mexico City, San Miguel de Allende was about three hours by bus, and worth the ride for its gorgeous scenery filled with churches, plazas, and a European feel. Via Organica at Calle Margarito Ledezma 2 was our mainstay, a peaceful environment with many expatriate clients, an organic garden, a natural foods store, and a pretty upstairs patio. I enjoyed their tamales, soup, salads, and green juices. La Media Naranja at Hidalgo 83 is a small and bright spot that prepares a yummy “Mexican Eggs without Eggs” breakfast of spinach, beans, potatoes, and pico de gallo, and nutritious juices with ingredients like beet, ginger, and celery. They serve falafel for lunch too. Nectar, at Correo #43, which had fish but was otherwise a vegetarian spot, was a refreshing change with a more gourmet touch. In a relaxing outdoor patio, we could choose quinoa, teff, and millet cereals with almond milk, a vegan meatball sandwich, or zucchini soup infused with lemongrass tea, among other unique vegan and gluten-free options.

Guanajuato was about a four-hour bus ride from Mexico City. I was completely enticed by the steep alleys filled with colorful buildings and a tranquil vibe. There were tours of mines, and creepy museums filled with mummies and torture devices used by the Holy Inquisition. Habibti Falafel at Sostenes Rocha 18, a small funky restaurant, became a favorite, dishing up delicious falafel, hummus, grape leaves, and salads. Mandala, 32B Calle Sangre de Cristo, served flavorful Indian food in a cheery environment. They also had vegan brownies! Midi Bistro, in South of France style at Calle San Jose #4, had an appealing minestrone and couscous along with live music and art.

For more nutritionally-balanced trips, I suggest staying somewhere with a kitchen that enables you to prepare your meals and remembering that the joys of travel outweigh the occasional lack of culinary variety. 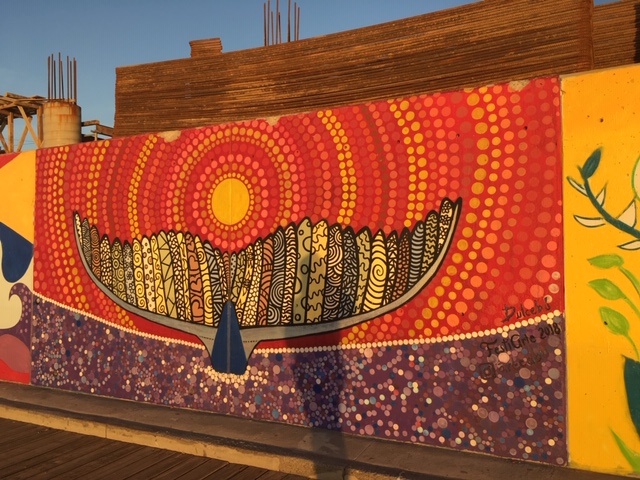 Inspired by Colors in Baja California