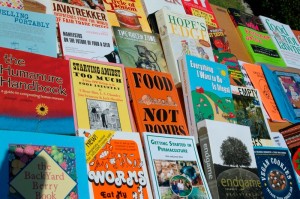 Veggie health — the well-being of not only vegetarians and vegans but vegetables themselves — is easy when we  have a nonprofit like San Diego Roots, which has been strengthening the local food movement since 2001. While they don’t focus on vegetarian issues, they address the bigger picture of sustainability within our urban food system to bring healthy local food to our communities.

“The San Diego community is increasingly realizing the vital connection of our food to health and the environment,” explained Elyssa Paige, Editor and Food for Thought Film Series Coordinator. “SD Roots is answering the call by providing programs that educate and unite us.”

From workshops and school gardens to film screenings and the new community farm and education center at Suzie’s Farm, SD Roots is working to promote a food system that is based in community and organic practices.

“It is our vision to inspire people to choose agriculture over agribusiness and play an active role in where their food comes from as we move towards a sustainable and healthy future,” said Paige, a food activist and vegan (since a friend and I took her to see Peaceable Kingdom years ago, not realizing what a major influence the film would have on her).

Support SD Roots on June 26 during their fundraising event with food, live music, and seed planting to celebrate finding land after years of searching. Roots’ will be collaborating with Suzie’s Farm (named after a dog) to create the Roots Farm and Education Center at Suzie’s. Donations are welcomed.

As part of Food for Thought — free films about food — SD Roots is also a having Roots Night Out event, showing “The Beautiful Truth” on June 29, about curing cancer through diet.

With organizations like these keeping an eye on our food movement, veggie health keeps on getting better.