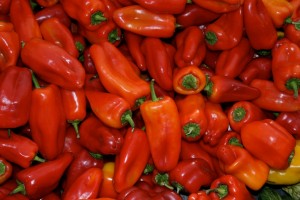 San Diego is just one of the cities with vegan dishes showing up left and right. One thing I excitedly discovered at the Ocean Beach Farmer’s Market (every Wednesday) was Express Vegetarian, run by a couple selling soy-free vegan burgers with jerk fries and other yummy meals people were lining up for. They also sell their goods at  a few other farmer’s markets in San Diego. Express Vegetarian will soon be in Ocean Beach daily, up the street from the market by the tamale stand in a parking lot on Newport.

Tommy’s Mexican Food also in Ocean Beach has some great burritos, tacos and such with no lard.

Options abound for veggie pizza lovers in San Diego. Vegans are vying for easily melting Daiya cheese sold at Whole Foods or at Pizza Fusion in Hillcrest (which also uses Follow Your Heart cheese). Daiya can also be found at one of zpizza’s locations, which offers gluten-free vegan pizza as does Pizza Fusion. Evolution Fast Food (formerly Nature’s Express) also offers Daiya cheese on pizza or as a special order on veggie burgers.

At People’s Organic Foods Market and Stumps (both in Ocean Beach), Boney’s Bayside Market in Coronado and other stores to come, “We Can’t Say It’s Cheese” is debuting, a vegan cheese made from oatmeal and free of soy, wheat and nuts. The cheese is delicious and more of a spread in a hummus-like container, though it is said to melt.

Speaking of hummus, near San Diego State University there is a new restaurant called Garden Fresh Grill and Smoothie that has Mediterranean vegan dishes like tabouli, falafel, the ever-popular hummus, salads, and refreshing smoothies.

For desserts, at Rebecca’s Coffee House in South Park, vegan muffins seem to be on the rise.

For previous write-ups on veggie options, events and experts in San Diego, click below on the tag “San Diego” and many articles will appear.