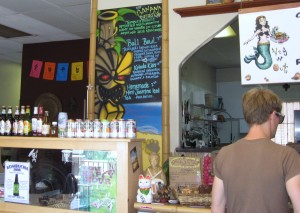 Want to eat in a relaxing setting that makes you feel like you are on vacation — with reggae playing, inspirational quotes on the walls, and the beach only a 15-minute drive? Head to Veg-N-Out in San Diego’s North Park, with indoor/outdoor seating  and friendly staff.

They are known for their hearty veggie burgers that come with green salads or freshly made potato wedges, but the menu is not limited to burgers. The recipes are homemade and all the paper goods are compostable and biodegradable. Extra touches are evident, like the mint and sliced cucumbers always on display so customers can mix up their own refreshing glass of water. 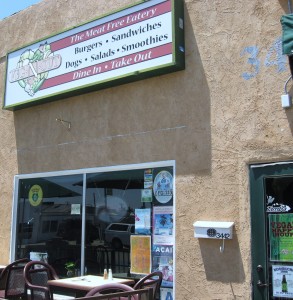 This spot was dreamed up by Rachael Fogg, who grew up hanging out at her mother’s veggie restaurant in Cardiff and was raised a vegetarian (though she is now pescatarian). Feeling limited by veggie dining options in San Diego, she solved this problem by opening her own restaurant in 2005. Her mission with Veg-N-Out was to make the vegetarian world easier for meat eaters. The Western Burger, for example, has veggie versions of bacon and cheese added, offering some comfort foods, especially for kids. With 75% of her customers being meat-eaters, she truly does serve as a bridge from meat to vegetarian foods.

The business is growing, though it has not been an easy journey for this single mother of two who worked part time elsewhere in the first four years of establishing Veg-N-Out. But her drive remains. In the future Rachael hopes to bring the restaurant to a different level, serving breakfast, doing more catering and events, selling products, and maybe opening a restaurant in San Diego’s North County.

This is definitely a place to veg out at, and for those watching their pennies, don’t miss the happy hours on the first and third Wednesdays at 4 and 7 pm – look for a special menu and a reggae DJ. Visit Veg-N-Out on Facebook.