Thanksgiving Much Improved for Veggie People 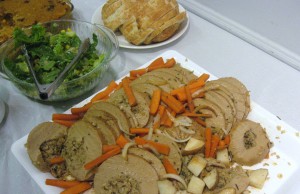 This year with vegetarian and vegan cuisine in the limelight, even a holiday strongly tied to a traditional turkey meal is being looked at through new lenses by Martha Stewart and NBC. With vegan recipes now widely accessible on the Internet and vegetarian cookbooks sprouting up all over, Thanksgiving has surprisingly turned into a rather enjoyable holiday for veggie people.

In San Diego we are very fortunate to have a wonderful vegan Thanksgiving event put on each year by Animal Protection and Rescue League (APRL). Yesterday the Fifth Annual Turkey-Free Thanksgiving Potluck was bursting at the seams with over 200 enthusiastic people bearing delicious vegan dishes.

For dinner we feasted on not only the stuffing, salads, stir-fries, and such brought by attendees but also gobbled up vegan dishes donated by Tofurky (a great turkey alternative),  Pokez, Rebecca’s Coffee House,  zpizza, and other local businesses.

The minute the event volunteers brought out the dessert, a long line of excited people formed.  Thanksgiving favorites like apple, pecan and pumpkin pies were joined by many treats including muffins, Uncle Eddie’s Cookies, baklava, and raw, vegan ice cream donated by Tomberlies.

While eating, the crowd heard updates from Bryan Pease, who announced APRL’s plans to work more closely with Compassion Over Killing. Pease said this year people are more receptive to vegan ways, caring about cruelty to animals raised in factory farms, and that politicians are seeing issues they can no longer ignore.

The event also had entertainment, with Bob Green playing piano and Harmony Cohen-Wolff performing sacred belly fusion and firedance to songs that pay homage to animals.

My only complaint about the evening was that it went by much too fast! 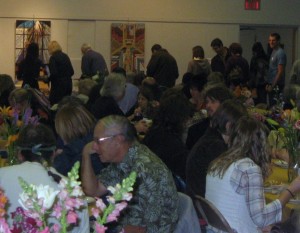