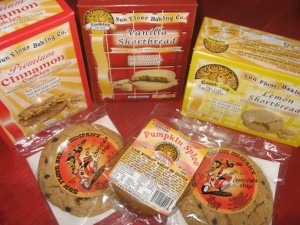 I cannot say enough positive things about the cookies and other amazing vegan products, many of which are gluten-free, that I have tried from Sun Flour Baking Company. My friend who is not a vegetarian sounded like a line in a commercial after trying the treats:  “The cookies are so delicious I can’t believe they don’t have gluten or eggs or anything like that.”

If you are in the mood for some vegan dessert, you may like my favorites, the Cinnamon or Peanut Butter Shortbread cookies. It is a great feeling to be able to eat desserts without feeling tired and overstuffed afterward, which typically happens for many people eating desserts with more processed sugars, wheat and dairy.

Sun Flour Baking Company was started by Rey Ortega in 1997. His childhood was filled with illness — headaches, bone pains and an Addison’s disease diagnosis — health issues which all disappeared after he became a vegan in 1993.

The vegan dessert products can be found online or at natural foods stores, or you may find them on certain airlines – just ask for vegan or gluten-free cookies. With Ortega’s new Hip Monkey cookie line said to have a buttery flavor, Sun Flour will start making their way into coffeehouses, schools, delis, smoothie places, and so on. Ortega is open to recommendations for places to sell the delicious goods. As for the future plans for the company, Ortega says ideas are never-ending.

In addition to running his company of 5 employees based out of Sacramento, Ortega attends vegan events when possible, or donates cookies if he is unable to attend. Some of his favorite events include the solar-powered Worldfest in Los Angeles, and the Animal Acres and Farm Sanctuary Galas.

On top of all that, Ortega is the business manager for the talented  Dan Piraro who created the cartoon Bizarro.

The next time you throw a party, whether having a small group of friends for dinner or a large gathering, you may want to indulge in some healthy vegan dessert from Sun Flour Baking Company, adding some Piraro books to the coffee table for a fun touch.