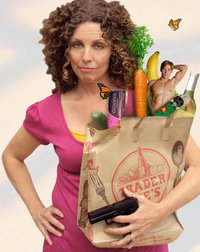 On June 17 at  a packed Swedenborg Hall in San Diego, Barbara Cole-Gates — not only an activist but one of the creative veggie people California is graced with — performed her one-woman show, Surviving Chrysalis. The three-part show explores key turning points in a woman’s life – from becoming a new mother to losing a soulmate. Surviving Chrysalis is accurately described as both soulful and funny, and also has sexy segments.

The show was the Official Selection of LA Women’s Theatre Fest 2010 and the winner at BEST of FEST – San Diego Actors Festival.

Cole-Gates cleverly mixes vegan and eco-friendly messages in. She mentions organic fair trade coffee and her “animal rights vegan daughter” with a giant heart who replaced the cow’s milk with soymilk. When her daughter wants her to attend a raw vegan retreat, Cole-Gates jokes, “That just doesn’t sound natural.”

There is also mention of a “vegan man” her friend meets at a store, and some organic fair trade products. These lines from the show make sense as Cole-Gates and her family are vegan, and for years she has been working on getting more veggie food into school lunch program.  Lean and Green Kids is Cole-Gates’ children’s health organization founded by mothers and focused on teaching kids about healthier, green food choices — for saving lives and the planet! LGK does advocacy and outreach and partners with other health organizations to raise awareness about the importance of shifting to a more plant-based diet for ecology, health and harmony.

Surviving Chrysalis is also going to have two shows in Los Angeles:  June 23 in the Hollywood Fringe Festival and June 24 at The Hudson Guild Theatre. Support your fellow veggie people who are spreading the word through their creativity!