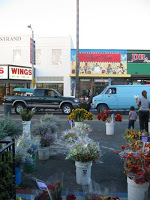 By Paige Newman, Exclusive to VegDining.com

See Comments Section Below for Updates

In addition to excellent restaurants, the city is famous for its seaside attractions, such as gorgeous, ritzy La Jolla – a superb spot for kayaking and splashing by the cove. Mission Beach is fun for roller coasters and people-watching, and Pacific Beach is a great walking spot.

In central San Diego, international cuisine abounds, from Thai to Persian and Ethiopian. All-vegetarian palatepleasers: Spread and Veg-N-Out in North Park, Earth Food hot dog stand in Hillcrest, and Jyoti Bihanga in Normal Heights (which is an antique hunter’s paradise).

Downtown’s historic Gaslamp District has an exciting nightlife, many European-style restaurants with outdoor patios, and – a few blocks to the east – Pokez, a Mexican restaurant with funky décor and multiple vegetarian choices.

Balboa Park boasts beautiful Spanish-style museums and also the World Beat Center, which serves Caribbean and African veggie food during its multi-cultural events. Along the west edge of the park is a prime stop for vegheads: Kung Food Express Café, which features a vegan drive thru!

And if you’re up for a drive, don’t miss Sipz Fusion Café, an Asian vegetarian place in Clairemont; or raw food specialists Cilantro Live in Carlsbad (also in Lemon Grove and Chula Vista). Veg-friendly Ki’s in Cardiff by the Sea offers ocean views and ample seating for large groups.

Paige Newman has written and volunteered for many vegetarian organizations since choosing to go vegetarian at age four. She has lived in San Diego for over three years.

This article was originally printed in VegDining.com. Photos courtesy of Paige Newman. 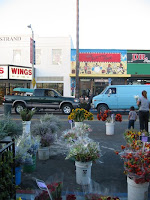