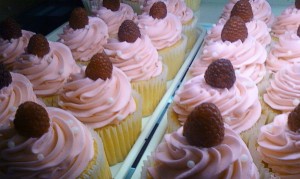 Bake sales have been all the rage lately, and San Diego can be proud of chef Michelle Negrete who, full of empathy for those affected by the disasters in Japan, put together a “Cupcakes for Japan” event on March 26. Held at Cucina Fresca, the event featured dozens of vegan items Negrete baked, and went beyond cupcakes to include empanadas, tamales and baklava. Some of the treats included matcha cupcakes with cherry lemon frosting, and cookies and cream Oreo cupcakes.

Over $100 in proceeds generated at the event will be donated to Convoy of Hope and International Medical Corps.

Negrete has always had a passion and talent for healthy cooking, and after catering several parties, decided to start a vegan/vegetarian company called Lucky Boom Catering and Cakes. I can’t wait to try her vegan tamales that feature beans, potatoes, veggie meats, etc. and even venture into international cuisine like Indian and Italian – see her blog. Dessert tamales are part of her menu too – let’s all feast on flavors like pumpkin spice, coconut, and Mexican chocolate with cinnamon, clove and cayenne!

Sounds like one of those vegan chefs to keep an eye on, as Negrete will no doubt impress the San Diego community with her creativity and passion!