Compassionate Woman Beyond Her Years 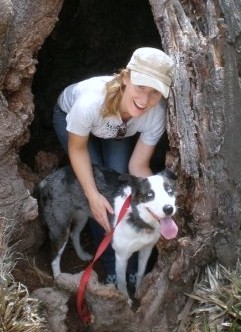 Kath Rogers became a vegetarian at age 9, when as an only child very bonded to her dog, she felt like animals were meant to be friends.  At 13, she looked up “animal rights” on the Internet, realized eggs and dairy involved cruelty to animals, and became a vegan.

“Once you know (about cruelty), then it’s a conscious choice,” said Rogers, 24.

In 2003, at just 19, she co-founded a non-profit, Animal Protection and Rescue League (APRL), with her husband Bryan Pease as Pro Bono Attorney. Now volunteering at APRL, Rogers is also a full-time student finishing her Bachelor’s degree.

Today, APRL is powered by seven employees and about 50 active volunteers.  Through APRL, five California cities passed resolutions regarding foie gras. Pease spearheaded the passing of a state law allowing the seals to stay at the Children’s Pool in La Jolla, and APRL urged the City of San Diego to install hundreds of educational signs about feeding squirrels leading to unnecessary poisoning. Rogers and company led one of the largest signature-gathering efforts to support Proposition 2, setting more humane standards for confining farm animals. Persistence was the key to making a big impact.

“If you have confidence, you can make change. In the coming generations, we’ll see a vegan world. Most social movements have seen that a small percentage leads the rest of society to do the right thing,” Rogers said.

To fuel her body for her busy life, Rogers mainly eats fruits, vegetables, beans, and grains – from teff and quinoa to amaranth and millet. Another daily boost is her smoothie with frozen mangos/berries/spinach, spirulina, acai, hemp, soymilk, and cocoa. A favorite meal is blended cashew cream over rice noodles with tempeh bacon.

She suggests people wanting to become vegetarian or vegan try new foods at the grocery store, and explore cookbooks like How it all Vegan and recipes at vegcooking.com.