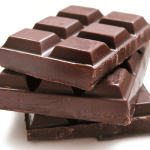 When chowing down on chocolate – whether on its own or mixed with things like peanut butter or coconut (or both in one type of the amazing Coconut Bliss ice cream) – people act as if they are committing a sin.  Indulge in your chocolate flavored with everything from mint to cayenne, because health experts claim chocolate has numerous benefits, and when eaten raw, is one of the most significant superfoods.

Chocolate has antioxidants and contains the type of fat that doesn’t raise cholesterol levels. But if too much chocolate (in its processed form) is eaten, it can lead to weight gain, according to Weil. Dark chocolate is good for the heart, and the best quality types are imported from Belgium, France or Venezuela, he says. Tropical Source and other brands make chocolate suitable for vegans, with no dairy or white sugar (sometimes derived from animal sources).

David Wolfe, a global guru of natural health and organic superfoods, has so much knowledge on the dark stuff that he penned a book, Naked Chocolate.

Wolfe says cooking and processing chocolate — which comes from cacao (or cocoa) beans in Central America — removes many of its healthful properties. He frequently eats raw, organic cacao beans and nibs (pieces of the bean). Wolfe believes cacao contains the highest concentration of antioxidants of any food in the world – even more than red wine, blueberries, acai, pomegranates, and goji berries combined. Cacao also appears to be the best food source for magnesium and is high in iron.

To top it off, Anandamide, the “Bliss Chemical,” an endorphin naturally produced by humans after exercise, has only been found in one plant – cacao.  Proof of chocolate being loved around the world is places with names like the Chocolate Hills in the Philippines and Chocolate Drop in New Mexico, among others.