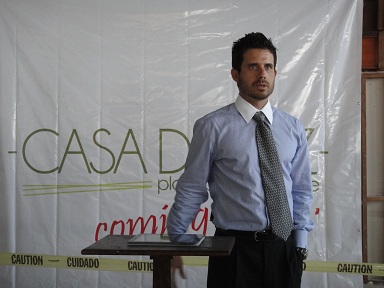 The San Diego community has been awaiting the exciting day when Casa de Luz, an organic, plant-based “dining room” style restaurant with cooking classes would open. The day has come! This informative article by local writer Janice Stanger gives us the scoop on how the idea came to fruition!

Reprinted from “The Perfect Formula Diet” blog by Janice Stanger 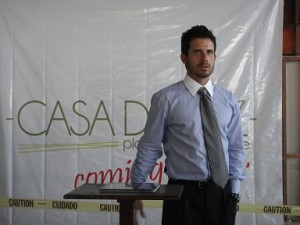 Wayo at the Groundbreaking Event

Eating out can be challenging on a whole foods, plant-based diet. Of course you can find vegan food in most restaurants, but it may well be too salty, oily, high calorie, low nutrient, and unsatisfying. This is not unique to eating plant-based. So many restaurants cater to tastes that have been warped by industrialized fast food, unhealthy school cafeterias, microwaved dinners, and packaged junk snacks.

In this landscape of undesirable choices, Casa de Luz will be a notable example of how much better we can be fed. I was excited to learn that Casa de Luz, a 20 year presence in the Austin dining out scene, will be opening in San Diego. Their dining room, in a converted Salvation Army building in the North Park area, will also feature a cooking school so you can learn to make appetizing, healthy meals at home.

I was lucky to have a chance to sample the Casa de Luz food experience at a recent Meet Up. The food is deceptively simple.

In fact, while using whole organic ingredients, our chef created an outstanding meal that I still think of with longing. The tastes are delicious, satisfying, complex, and memorable.

Far from being a restaurant, Casa de Luz in San Diego will be a dining room. Customers will sit at large round tables so they can chat with fellow diners while watching the staff chop vegetables and create savory meals in the large, open kitchen. Just observing will be a learning experience. The idea is that experiential learning is a powerful way for people to change and incorporate this healthy way of living – more powerful than a simple class would be. 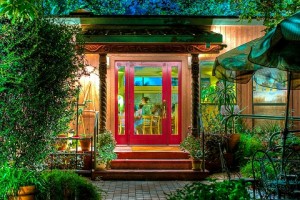 Eduardo (Wayo) Longoria III, the founder of Casa de Luz in San Diego, is the son of the Austin dining room and holistic center founder. I was fortunate to talk with Wayo and learn more about why he’s starting the San Diego center and his long-term goals, which include healing both for his own serious diagnosis and for the community. Just as important, Wayo is passionate about the rich possibilities of the enjoyment of whole foods. He loves this way of eating, far more than previous routine diet choices.

Wayo’s family has been in the food business since he was a child. His Dad, originally from Nuevo Laredo, had a company called Healthy Snacks. These were packaged snacks that were less bad than the regular movie concession stand variety.  Wayo’s Dad sold the products on the honor system. People were not ready for this kind of payment and the company went out of business.

In the meantime, though, Wayo was literally a kid in a candy store – he would go to the warehouse full of these products and grab them by the handful. He was athletic and did not gain weight, but on the inside he was suffering the consequences of empty calorie choices.

Wayo had a stint at boarding school, where he also ate junk food in enormous amounts. Later he learned the restaurant business working at his family’s Burger King and Papa Johns franchises.

Wayo decided to branch out on his own and opened a seafood restaurant in Monterey, Mexico. At that point he was consuming seafood every day, for just about every meal. Instead of ending up a model of health, as the fish hype would lead you to believe, he got mercury poisoning and had to get chelation to get this destructive metal out of his body.

After getting through mercury poisoning, Wayo had an even more devastating diagnosis. He had started suffering with vertigo and numbness. He learned he had multiple sclerosis, a life-changing autoimmune disease that can lead to progressive neurological damage and sometimes even total disability.

Determined to beat his illness and get healthy, Wayo joined his family in Austin to research natural methods of combating multiple sclerosis. He discovered macrobiotics at the Austin Casa de Luz. Macrobiotics is a balanced yin-yang approach to eating that mostly relies on seasonal  whole plant foods, especially grains, beans, and vegetables. Macrobiotics is well-known as a healing diet for catastrophic diseases including cancer, diabetes, and heart disease, and Wayo was optimistic it would help his multiple sclerosis.

A journey to Europe to study macrobiotic cafes and work with macrobiotic chefs soon followed. Wayo learned the various schools of macrobiotic cooking and how to cook the most enjoyable foods in Amsterdam, Italy, and France. During this time he kept meticulous track of his multiple sclerosis flare-ups. He noticed these disease remissions got less frequent and milder. One year in Europe he had no flare-ups at all, despite being on no medications. He found Europeans to be accepting of healthy choices in eating out. “I felt part of a larger community there, not isolated” Wayo notes.

Still, since his Mom and cousins live in San Diego, Wayo decided to return there and start his own dining room founded on whole foods and the model his Dad is successfully following at the Casa de Luz in Austin. The Austin Casa de Luz has a loyal following of regulars based on delicious food that just happens to be healthy.

All the food will be tasty, organic, unprocessed, and nourishing. Diners will start their meals getting their own soup and salad, then runners will bring carefully designed plates of tasty food. The flavor of real unprocessed food grows on you the more you eat it. There is no menu to choose from, but you can check the restaurant’s site before going to see the food that will be served that day. If you want an add-on to the meal, there will be desserts, a juice bar, tea bar, wine, and beer, or you can buy another half plate of the main meal.

Artesanos, the cooking school, means “artisans” and is carefully named. Wayo explains that cooking is creating art work. “You are hand crafting your body. What you put in your mouth becomes you. If you eat wrong, you won’t be a masterpiece.” The cooking school is affiliated with the University of California, San Diego Center for Integrative Medicine. This innovative medical provider with sponsor some of the cooking classes for their patients, along with other alternate approaches to healing, such as acupuncture and meditation.

The parent company of Casa de Luz in San Diego is Commitment to Health, LLC. Everyone who works in the dining room will commit to their own health. Wayo finds potential employees are very open to this. While they can eat any way they want, they need to commit to eating healthier and making progress toward a whole foods, plant based diet.

Casa de Luz will open in San Diego most likely at end of November or early December 2011. Check their Facebook page for progress. Wayo is working on the final construction and hiring of the rest of the staff. He is so excited that he is once again like a kid in a candy store, but this time the “candy” is healthy, organic, and truly delicious for the educated palate. Casa de Luz will be a destination center for anyone interested in enjoyably nourishing their body while enjoying the best food on earth.

Most importantly, diners will learn they do not have to choose between taste and health. In fact, for the quality of food that the dining room will serve, taste and health complement each other. I hope Wayo clones Casa de Luz to many more cities.

If you enjoyed this post, you might want to read Twelve Ways to Make Cooking Fun and Easy.

Intrigued? Now you can use our Whole Foods Blog Finder to target informative, fun postings on whole foods, plant-based nutrition. Quick information at no cost!

Blog posting by Janice Stanger, Ph.D. Janice authored The Perfect Formula Diet: How to Lose Weight and Get Healthy Now With Six Kinds of Whole Foods. This easy-to-follow eating plan is built on whole foods, plant-based diet that can prevent, and even reverse, most chronic disease as well as get you to your perfect weight. Janice expects Casa de Luz will quickly become her favorite San Diego dining room.