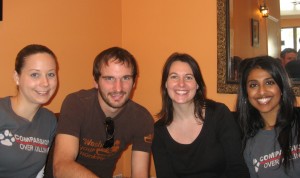 A group of about 15 volunteers met on Feb. 20 to discuss their newly formed Advisory Board of Compassion Over Killing (COK) in Los Angeles.  Over lunch at SunPower Natural Cafe in Studio City and guided by Prabhat Gautam of Positive Television, they discussed online marketing,  outreach to restaurants and schools, fundraisers, and more.

Devin Murphy, a COK Board member, explained that in L.A. there was a vacuum — more outreach and focus on farm animal issues were needed. The group will build a strong vegan community by bringing people from different areas of L.A. into one place, and tapping into the existing vegetarian community that is not yet active.  They also want to connect people from different high schools, colleges, universities and meetup groups. The L.A. region has many vegetarian and vegan restaurants, but the Board plans to increase vegan options at non-vegan restaurants.

They’d like to do entertaining video outreach that entices people with vegan and vegetarian foods rather than depressing factory farm footage.

As we finished our meal, we had fun talking with Ronald Jackson, one of the owners of SunPower Natural Cafe, open less than a year. Everything but two menu items can be made raw, and they make sure nothing tastes like being deprived, since the food is super flavorful, he said. Surprisingly, more than half the customers are meat eaters, and 25% of them follow the raw foods diet.

The waiter said people come from all over for the sweet kale shake.  It was an enormous serving rich with cashews, agave, and banana.  Jackson told us one customer came in 52 days in a row for that shake!

People enjoyed their veggie burgers and other meals too. SunPower Natural Cafe made a great meeting place for inspired veggie people to come together and create change.