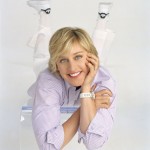 Whether you’re craving tamales, potato latkes, or something else for the holidays, you’ll find vegan recipes on the website of popular TV show host Ellen DeGeneres, who’s generous in providing veggie-friendly resources for fans. Since putting down the cheeseburgers and steak she loved and going vegan, Ellen has served as a source of nutritional information, shopping ideas, and more for her fans. Ellen is one of many famous vegetarians informing and inspiring people interested in becoming vegan.

Someone in the spotlight for his recent work and appearance on Ellen is Jonathan Safran Foer, author of Eating Animals, who realized something about eating animals made him uncomfortable. He also noted that factory farming is the number one cause of global warming. Cruelty to animals on factory farms has been spoken of for years, but perhaps the masses are finally ready to listen, and find it refreshing to hear from a new advocate on the disheartening topic.

We are not all lucky enough to have a personal chef in our homes like Ellen, but luckily she shares chef Roberto Martin with fans, and entices us by posting his cooking videos and recipes online. Martin moved in a vegan direction when cooking for a celebrity family whose child had juvenile diabetes.

Another chef who was a guest on Ellen was award-winning Wolfgang Puck, who whipped up a vegan pizza that looked delicious, covered with pesto and fresh vegetables from farmer’s markets. Ellen also featured Dr. Neal Barnard, founder of Physicians Committee for Responsible Medicine and President of the Cancer Project, who educated the audience on the current American diet, saying, “We are not where we need to be, we are heavier than we have ever been, we’ve got heart disease, diabetes and cancer, and most of it is related to what we are eating.”

With so many experts and famous vegetarians willing to lead the way, becoming vegan has probably never been easier.  I am so happy the well-liked Ellen is one of the mentors.