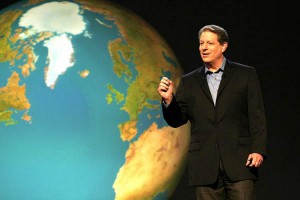 For years we have been  hearing about the rapid destruction of the planet, and people are finally making the link between the food they eat and the environmental crisis.   Al Gore, former Vice President of the United States,  is known for passionately advocating for climate change through his book and film “Inconvenient Truth.”  The vegetarian community has been hoping Gore would take the next step and declare he was becoming a vegetarian.

Since “Inconvenient Truth,” Gore has led over 30 Solutions Summits to address the climate crisis. He is a co-founder of Live Earth, which famously held online global concerts in seven continents in 2007, inspiring 2 billion people to take environmental action. They are planning a run in April for the water crisis.

Gore agreed with Lord Nicholas Stern, author of the Stern Review on the Economics of Climate Change, that reducing meat in one’s diet is the right thing to do to improve the climate problems.

“It’s absolutely correct that the growing meat intensity of diets around the world is one of the issues connected to this global crisis – not only because of the CO2 involved, but also because of the water consumed in the process,” Gore said on Lateline. Gore says he is not a vegetarian but is cutting back sharply on eating meat.

He also mentioned that “we have all heard from our doctors for many years that vegetables and fruits should occupy a bigger part of all of our diets and that’s important for a lot of reasons.”

Reducing his meat intake is a step in the right direction, but I still hope Gore puts all this knowledge and his celebrity status to further use by becoming a vegetarian and encouraging others to do so. If you feel inspired, send a quick letter to urge Gore and the Alliance for Climate Protection to add vegetarianism to their global warming solutions.